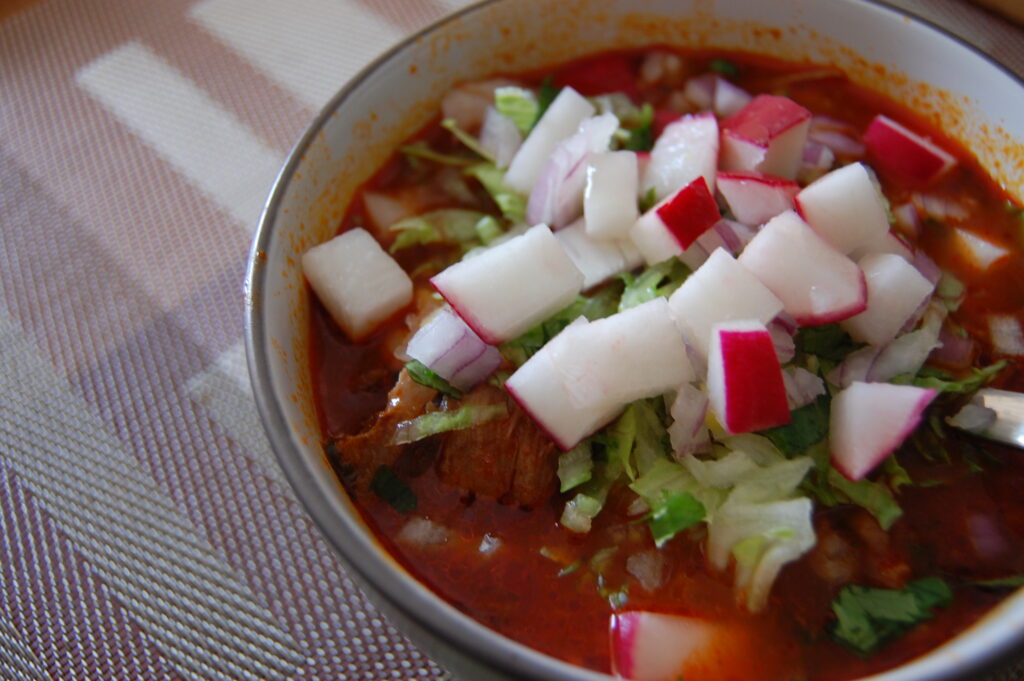 Cinco de Mayo is a huge celebration and people go crazy on that day. They eat all sorts of Mexican food, drink Mexican beer or Tequila, make tons of guacamole and have a Mexican-brand hangover sometimes! So while America celebrates the triumph of Mexican militia over the French Army in the heroic Battle of Puebla, get yourself ready to cook an amazing traditional dish that’s both delicious and a very effective hangover home remedy.

Pozole is a complex and elaborate dish that Mexican families eat only on special occasions. It’s usually the main dish and the “after party” dish. But you can be eat it at any point of the day. Like any Mexican stew or soup, it magically tastes a million times better the next day after you cook it. And as we Mexican like it, peppers play the main role.

RELATED POST: 3-Way Guacamole – Dip into these 3 unique recipes of a Mexican classic

Although the ingredients and the long time that it takes to cook give pozole a complex taste and can be sometimes intimidating to first-timers, is fairly easy to make and very difficult to mess up. So go ahead!

Traditional Mexican pozole is a stew you can make out of pork meat, pork bones, corn, and dried peppers. Depending on the region and ingredients, you can find red, white or green pozole. This time, we’ll cook some delicious red pozole full with flavor and not too spicy!

For the Pozole you’ll need:

You will also need some fresh vegetables to add to your dish at your taste.

Of course, salt and lime juice, and maybe something to make it actually spicy. Now let’s go step by step.

Be sure to have everything in hand before starting. Pozole practically cooks itself but timing is important.

This is mostly what you need to start your Mexican Pozole this Cinco de Mayo. First, you should wash pre-cooked corn thoroughly. Then put a large pot with water and add the pork.

It looks like a lot, I know! but trust me, it shrinks a little bit once cooked and you can never have enough meat in your pozole. The reason pork should go first is because you have to remove the debris that comes from meat and bones cooking. This is mandatory and my mom was very strict about this step. Apparently, leaving this foam gives a foul smell and bitterness, but that may just be ancient Mexican ideas, so practically science.

That thing. You don’t want that in your pozole. Remove it with the help of a spoon, the ones with small holes on them work like a charm. Once you remove this debris, add the corn and don’t for the love of everything that’s pure, add salt. Salt will prevent the corn from cooking appropriately and it’ll end up tough and just not good.

Add the garlic head, cover it and forget about it for about 2 or 3 hours. You can peek from time to time to check how everything’s going. You’ll know it’s done when the corn looks a little bigger and, as we call it, “reventado”, which literally means “blown up”. Let’s get to the sauce!

You have your dried peppers, either ancho, pasilla or guajillo works fine. I used 6 ancho and 8 guajillo peppers. Whenever you work with dried red peppers, be sure to remove the stem, seeds and veins, since they can make your dish bitter. You just want the huge amount of deliciousness found on the actual pepper.

Once they’re clean, put them in a pot with just enough water to cover them up, bring it to a boil and let it simmer for like 10 minutes.

Once the peppers are tender and the water is red, take them out and put them in the blender, along with half the water in the pot, two cloves of garlic and a pinch of oregano.

Blend until the sauce is homogeneous but don’t put it in the pozole just yet. Wait until your pozole is almost done, you can tell by looking at the corn which should be slightly tender and start to pop. Then is time to put the sauce in, but not directly from the blender, since it still has some small pieces of pepper skin.

To make the sauce into a completely homogeneous paste, pass it through a strainer and push the sauce in with a spoon. Use some of the leftover water, where you boiled the peppers, if you need to.

Leave your pozole enough time to finish cooking, which again you can tell by looking at the corn. This is also the time to add salt since the corn is already done. If you want to, you can add a little cilantro, this is completely optional, but my mom does it and we grew up very happy.

3. Get your fresh vegetables ready

A few hours have passed and your pozole is practically done. You’re desperate to have some but you still need to get your fresh vegetables ready, since they make the dish whole and should be placed individually in every plate.

Slice everything that we previously mentioned, make it as small as you want. Personally, I like my radish a bit bigger, but that’s just me.

The pozole alone should have some spiciness from the peppers, but that’s not enough! If you’re lucky, you can come across some chiltepines or chile piquin, which are tiny round and oval peppers (about the size of a lentil or a bean, respectively). You can buy them fresh or dried. But you want the latter for this. You crush them and put them in your soups and stews and you’ll see heaven. Don’t be fooled by their size, they are HOT.

To eat your pozole just serve hot on a plate and put your fresh veggies on top. First the lettuce, then the onion and radish, cilantro and some lime juice and chiltepin (if you have been blessed to have some around), or any hot sauce that you like.

Some people think that the hotter and spicier the better if you’re trying to cure your hangover from Cinco de Mayo partying!

So there you go! Hope you enjoy this recipe of an authentic Pozole which is perfect for any special occasion. As you can see, it’s not that hard and it does most of the work by itself. Always look for fresh ingredients and if you have any question, feel free to ask anything in the comments section!