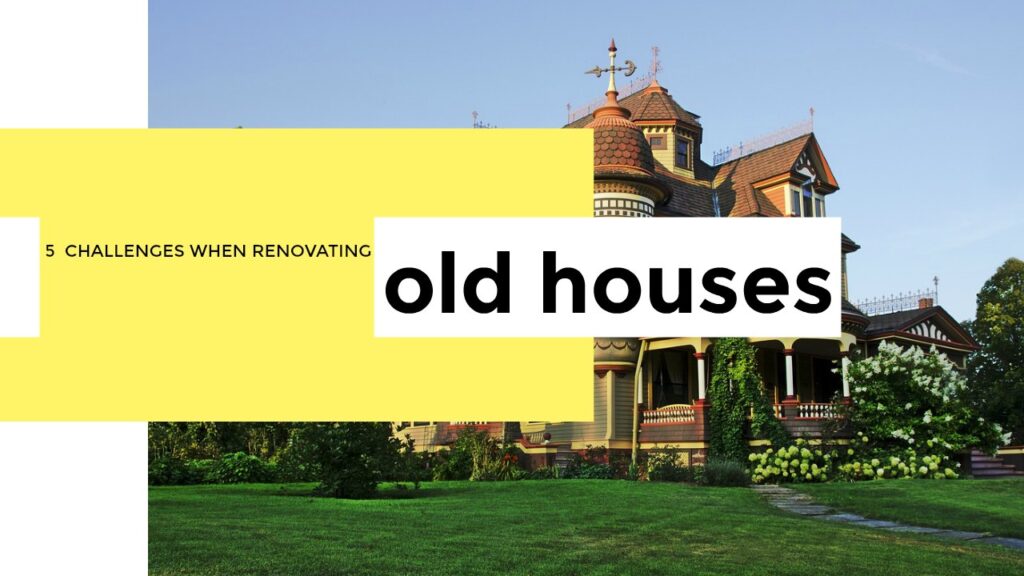 Older houses have so much more character than new ones. New builds are usually designed to very similar specifications and the inside of your house will be pretty much exactly the same as all of your neighbors. But in an old house, it’ll have so many great features that are unique and everybody that’s ever lived there will leave their mark on it. Some people don’t like that and they’d rather start with a blank slate but other people want a house that is full of character and history.

The other major benefit of buying an older house is that it’ll usually cost you less and you can get more space for your money. There have also been a lot of problems with the quality of workmanship on new build houses recently and people are discovering a lot of serious problems after moving in, by which time it’s too late.

That’s why you might be better off refurbishing an older home rather than a new build. However, that doesn’t mean there aren’t any downsides to buying an old house.

You’re probably going to have to do a lot of work on it. Those costs can push the price up quite a bit, depending on how much you’re capable of doing yourself. People often end up in a sticky situation because they take on a project without really considering the amount of work that’s needed. Midway through the task, they then realize that they can’t afford to pay for it all.

The first thing you should always do is get a home inspector in to look at the house. They’ll be able to tell you whether the work needed is just cosmetic, which is fairly easy to do yourself, or whether it’s more serious. If there are big structural issues or major problems with damp, for example, that’s going to be massively expensive to fix and you should probably steer clear.

But if the surveyor clears it and the bones of the house are in good condition, you can move forward. But before you sign anything, you need to be aware of what’s in store for you. These are the biggest challenges that you’re likely to face when renovating an old house.

These days, most plumbing is done with PVC or copper pipes but before 1960, different materials were used. The galvanized steel pipes that plumbers used to use most of the time are far more prone to clogging or wearing down than the new ones. You can always risk it and leave it as it is but that’s going to cause you a lot of problems in the future when you inevitably get leaks. You’re much better off replacing them right away and avoiding the chance of water damage to the rest of the house which will cause no end of problems with damp etc. It should go without saying that this is a job you shouldn’t be doing yourself.

Messing around with the plumbing when you don’t know what you’re doing is only going to end badly. Get a professional plumber in and have them sort it out for you.

Old wires are a big problem too because they can be a serious injury risk. If the wiring was installed a long time ago, they won’t be capable of handling that many things all plugged in at once. Back then, the number of electrical appliances that people had plugged in at one time was nowhere near as many as we have now. Even a couple of small appliances going at once can cause the power to cut out which is a massive inconvenience. Old exposed wiring also needs to be sorted right away before anybody gets hurt. You could always try to learn to live with a limited power supply but you may as well get it updated so you don’t have to worry. It’ll be quite expensive but it’s worth doing if you want to live comfortably in your home.

If there hasn’t been anybody living in the house for a long while before you buy it, it’s likely that some other guests will have moved in. Old houses are magnets for pests of all kinds so you’ll have to clear them all out before you can move in unless you want to share your house with insects or rats.

One pest that people often forget about is bees, but they love to build their nests in old, empty houses. Don’t make the mistake of thinking you can get rid of it with a broom handle and a bin bag, you’re going to get stung all over if you do that. You need to call up a proper bee removal company and have them deal with it for you. They’ll make sure to safely dispose of the nest at keep it from coming back.

If you’ve got rats in the house, it’ll need to be tented to get rid of all of them to make sure that you allow time for that when you’re renovating. After you have had all of the pests cleared out, you need to take steps to make sure that they aren’t getting back in. The pest removal company should be able to tell you how they’re getting in (usually, holes in the floorboards). You need to fix any holes right away before any more pests start moving into your home.

But even if you’ve done that, old houses are more prone to pests anyway so always make sure you’re on the lookout for any signs that they might be back.

In the past, we used a lot of building materials that we’ve since realized are harmful to your health. In an old house, you’re likely to find some of those materials somewhere. Lead paint and asbestos are the most common. If we leave them undisturbed, they aren’t actually dangerous. But as soon as you start doing work on the house, you upset those materials. Then, the dust and fumes can do some serious damage.

Removing them safely is a dangerous job and you shouldn’t do it yourself. You can get lead paint testing kits and test for yourself. However, if you find that the paint does have lead in it, don’t try to remove it yourself.

You need trained professionals to get rid of asbestos or lead paint safely. It’s fairly expensive but it’s worth it for the peace of mind.

Once you complete those dangerous tasks, you can start doing some of the work yourself.

Cosmetic work like painting or removing now vacant bee nests are both jobs that you can safely tackle.

These are a great way to save money on renovations. When you’re painting, consider the features that give the house its character. Then, choose colors that fit around them. Stick fairly closely to the original decor. Otherwise, you might lose what made the house great in the first place.

Preserving the original architectural details as much as possible is the most important thing when you’re renovating an old house. Otherwise, it won’t look right. There are so many great features in older houses like handrails, coving around the ceilings, windows and doors that set it apart from a new build. The only problem is, you can’t always get replacements for those things when they need repairing because the materials aren’t available.

Flooring is a particularly tricky one. This is because the thin oak boards that were the standard back then aren’t readily available now. Building standards have, after all, changed quite a bit. But don’t fear, you will still be able to find the bits you need. There are some great architectural salvage stores out there that strip old houses like yours. Those shops will probably have the materials that you need.

There are also companies that specialize in recreating the features from period houses with new materials. It won’t be entirely authentic but you can’t really tell the difference when you look at it.

The design of homes was a lot different in the past. These days, we build homes with relaxation spaces and practicality in mind. But that wasn’t always the way. This fact means you’ll have a lot of long, narrow corridors and lots of smaller rooms. Because they had a separate room for every single thing. You can get around it by taking out some of the walls. Then you can make the rooms larger but you’ve got to be careful.

Before you start making any plans, get a contractor to come and look and see where all of the load-bearing walls are. He or she can make sure that the structural integrity of the house remains safe.

If you don’t want to do any major work like that, you’ll have to get creative. Forget the idea of a standard house layout. Instead, let the rooms dictate the layout to some extent. Utilize the smaller rooms as nice spaces for you to relax on your own and read a book. And use those larger rooms for the living areas and bedrooms.

Renovating an old house is a big job and you’ll have to overcome all of these challenges. But if you can get it right, you’ll have a beautiful house with heaps of character.

Today’s contributor certainly offers some great pointers. As I am currently renovating my mid-1960s home, I am seeing a few of these same issues. This is especially true about the odd layouts and old plumbing!