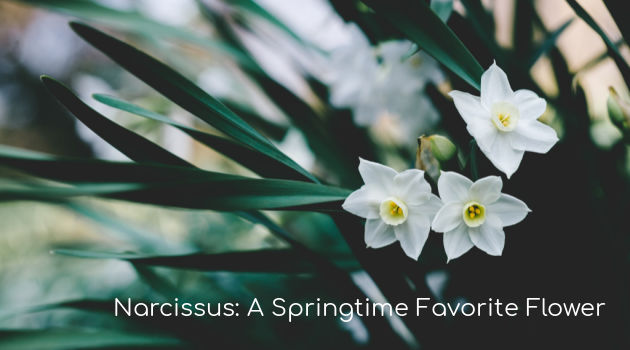 Though the best-known member of the genus is the cheery daffodils, narcissus is the umbrella name for the numerous narcissus flower species, varieties, forms, and hybrids.

Species and genus name confusion aside, the flower most likely originated from the Mediterranean region and spread to the other parts of the world like Central Asia, China, America, Holland, and many other places like Germany—where it’s currently the most popular flower.

Narcissi are usually among the first bloomers to air their cheery tones in the early spring, essentially announcing the end of winter. Their mainly white or yellow flowers are made of three petals, another three petal-like sepals (also known as the perianth), and a corona (the central cup-like appendage)—which sometimes may be of a different color.

The origin of the name Narcissus

The name narcissus is often linked to the Greek myth of a young man named Narcissus who ended up falling in love with his reflection. Actually, he’s believed to have fallen in a stream after growing tired from staring at his “beautiful image” in the water.

The flowers that commonly grew on and along the banks of the very streams and river where he perished, were, therefore, named after him.

In fact, to date, some believe that the daffodils naturally bend their necks facing the ground to symbolize Narcissus’ bending over the water to admire his image.

Other meanings and symbols include faithfulness, good wishes, and respect. But it’s also used to describe an individual who is always full of himself.

Hint: Plant the bulbs in long rows if you intend to grow the flower (solely) for cutting purposes.

i) Daffodils—which feature trumpet-shaped flower(s) set on a star-shaped background. They symbolize friendship.

iii) Paper Whites—are the early bloomers of the narcissus variety with strong scented white flowers, and are mostly grown indoors. They’re usually sold in decorative pots, which are meant to be disposed of once the 3-week bloom period comes to an end.

However, you can still save the bulbs if you want to. Simply dig it up (the bulb), dry, and then clean. Store in a container or paper bag and place it in a cool dark location until the next spring.

Ensure you stake your paperwhites so they remain upright even when they become top-heavy. Use a bamboo stake if possible to prop them up.

People grow narcissus for different purposes—which can be to beautify the spring landscape or for abundant harvest as cut flowers. Regardless of what you grow it for, ensure your growing location isn’t waterlogged so as to prevent the bulbs from rotting.

When harvesting, wear gloves to protect yourself from the irritating effects of the slimy sap this plant produces.

The sap is also poisonous to other flowers and can significantly shorten their lifespan if put together in a vase.

If you intend to have a floral vase with a combination of flowers (narcissus included), consider “conditioning” the narcissus first. Simply place the freshly cut stems into some cool water (only the narcissus stems) for about 2-3 hours.  This allows for the callusing of the stem ends, thereby, stopping the flow of the toxic sap.

Avoid re-cutting the stems as it may trigger the oozing sap again.

A pure narcissus floral arrangement (whether of a single variety or several) doesn’t require all the “conditioning” procedure—so don’t stress out.

Maureen joined the DIY Home & Garden team in 2018. She loves writing about gardening, wellness, and raising healthy children. As a full-time author and parent of two children, Maureen knows a trick or two on these topics.

She proudly publishes the website: The Perfect Parenting Place.