Home » Cilantro: A Growing, Care, and Use Guide 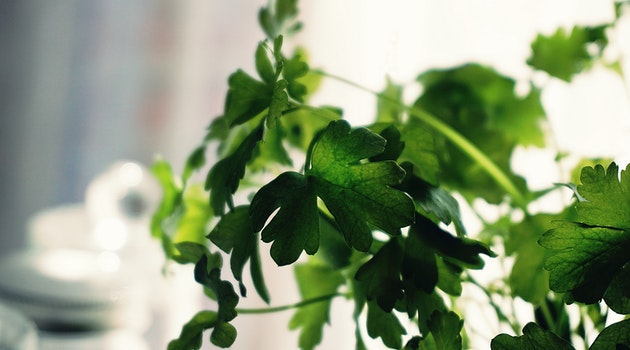 Cilantro (Coriandrum sativum), also better known as coriander, is a multi-purpose annual herb with shiny, broad, and flat leaves that almost resemble those of parsley. Perhaps the major physical difference between the two is that parsley leaves have pointy serrations whereas cilantro leaf serration tends to be more rounded and lacy-looking.

The herb (Cilantro) is believed to have originated from North Africa, Southern Europe, and the western part of Asia.

Other than its culinary use, cilantro was (and is still) also used in the medicine space to treat digestive problems such as dyspepsia and gastrointestinal spasms in addition to being an appetite booster.

Externally, it can be used to ease joint pain and inflammation.

The herb thrives well in outside garden (on the ground) but can also be grown indoors in pots—which should be deep enough to accommodate its big taproots. It is self-sufficient to a great extent, requiring little help from you.

Just like the other members of cilantro family, Coriandrum sativum also has several cultivars, and they include:

Santo is a slow-bolting cilantro variety often grown for its leaves. Other than the seeds and leaves, its flowers are also edible.

They (the flowers) are best used raw since the flavor tends to fade quickly when cooked.

Use on bean dishes, salads, and chicken.

This variety is also a great attractor of the beneficial insects like bees and tachinid flies.

It takes 7-10 days for the seeds to germinate at a temperature of 65-70 degrees Fahrenheit.

This standard type of cilantro is very similar to Santo when it comes to flavor, uniformity, and cold-tolerance.

Calypso full bulky plants are the slowest to bolt. They’re estimated to be 3 weeks slower (when it comes to bolting) than Santo.

Bolting is likely to occur in the midsummer heat.

This cilantro variety is bolt-resistant and unlike calypso, it exhibits a tidier, more upright form.

Its sturdy stems and large leaves make it the preferred bunching variety for market sales.

It grows fast with large leaves and can overwinter in zones 8 and 9.

Cilantro prefers full sun but can also tolerate light shade, especially for areas with a warm climate. Grow it where it will receive early morning or the late afternoon sun, and be shaded when the day gets hottest—to keep from overheating.

The soil should be well-drained with a neutral pH level of 6.2 to 6.8. You can improve your soil by mixing in aged compost or any other rich organic matter.

Consider premium potting mix if growing the herb in a container. It’s more aerated compared to garden soil, which is dense.

70 degrees Fahrenheit is good enough to extend cilantro’s life span. Anything more than that, (say over 75 degrees F) will quickly trigger the herb into bolting thereby cutting short your harvest cycle.

Just water enough to keep the soil moist. About an inch of water, a week is sufficient. Regularly check the soil and irrigate when it appears dry.

Fertilize with water-soluble fertilizer about once a week—to boost foliage development. Stop fertilizer application once the plant flowers and begins to set seeds.

You can as well use organic fertilizer or simply add well-rotted manure/compost into the soil before planting. This option is great if you intend to grow your cilantro organically.

Pruning helps encourage new growth by delaying the seeding process and in turn prolonging your harvest time.  Also, when grown out, cilantro’s leaves tend to be bitter; making it less desirable.

Begin trimming off the stems once the plant is 6 inches tall—roughly 60-75 days old after planting.

You can either pinch or use sharp scissors to remove the stems. Just ensure that you don’t cut past the newly emerging growth.

Harvesting is pretty much the same thing as pruning. So by 60th or 75th day after planting, trim your cilantro leaves and use them when fresh.

Simply hold a stem by its outermost (or extreme) leaves using your thumb and forefinger. Trace downwards where there is new growth coming up. You do not want to damage the herb, so pinch only about 1 cm above the emerging growth—to take off the leaves and the stem above it.

Avoid pulling off the stem as this can damage the entire plant.

The secret to a prolonged harvesting cycle is to begin pruning early and do it often; to encourage new growth. Once the herb begins to flower and produce seeds (commonly known as coriander seeds), you can no longer harvest it. The leaves will have lost its flavor.

Use shears or sharp scissors to cut those large leafy stems—just above the ground. By this time the stems should be 6-12 inches tall, which is the appropriate harvesting height.

Harvest, at most, 1/3 of the plant’s mass to allow it to retain its strength. You can visually assess and count the large stems on every plant before deciding on the number to remove.

Problems to look out for when growing cilantro

This is a powdery white coating that you’ll most likely spot on the foliage during the hot dry periods.

Offering the plants sufficient moisture and not overcrowding them is an effective way to prevent powdery mildew.

A layer of mulch around the plants will help to boost and retain the moisture content of the soil.

In the beginning, the spots will appear yellow and small then later turn into large brown spots.

Drying is probably the most effective method if you want to keep your harvested cilantro for longer periods of time.

And so, below are the three methods you can use.

Wash your cilantro under cool running water then use paper towels to pat it dry. Tie the stems together into clusters with twist-ties or simply some string. Hang in a warm dry place away from direct sunlight and leave to dry for several days.

Note: Ensure you put the bunch of cilantro in a paper bag before hanging it upside down to dry. The paper bag helps keep dust off your drying cilantro and enables you to gather any leaves that might fall off during and after the drying process.

The oils and fumes from the oven can as well deteriorate and change the taste of your dried cilantro.

After washing, pat dry with a paper towel.

Place on a baking tray and heat in the oven for 30 minutes. Ensure you set your oven at its lowest possible temperature to prevent the herb from burning even as it dries out.

Consider lining parchment paper onto the baking tray before placing the cilantro leaves. This will help prevent the leaves from getting glued to the tray during the drying process.

After the same washing procedure and removing the excess water, place the herb onto your dehydrator trays. You can remove the stems (optional).

Set the dehydrator to 110 degrees. Let the herb dry for 3-5 hours. Your cilantro will be brittle once completely dry.

This is great for storing large amounts of the herb. Wash the leaves and stems then dry them thoroughly. Place in an airtight freezer-friendly container or re-sealable freezer bag, and freeze. It will store for a year.

The Takeaway on Growing Cilantro in Your Garden

What’s your reason for growing cilantro? If you intend to use it for medicinal and culinary purposes, feel free to give it some partial shade.

However, if you’re growing it for seeds (popularly known as coriander), full sun is mandatory. Cilantro hates movement, so decide in advance where you want it to grow.