Home » How to Landscape to Help Stop Wildfires 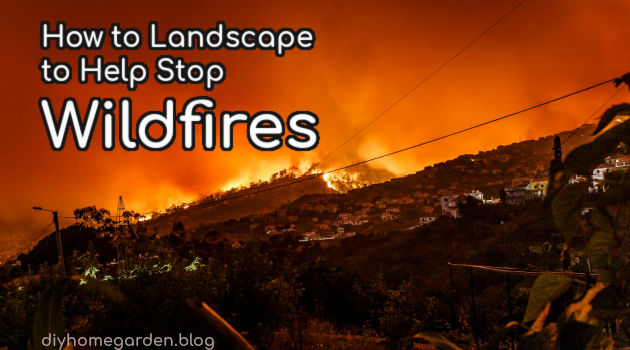 On a Wednesday morning in September of 2020, residents of San Francisco woke up disoriented to a frightening sight. Foreboding, glowing orange skies. Gigantic, extremely dense plumes of smoke from a series of wildfires raging across California descended upon the Golden Gate City.

In a once-in-a-generation event, these hazardous plumes generated pyro-cumulonimbus clouds called fire thunderstorms, blocking out the sun. They allowed only yellow, orange, and red light to reach the surface.

At that time, there were 28 major blazes. Around 14,000 firefighters battled these spectacular flames, with wildfire mitigation and fire damage restoration services at the ready. The wildfires burned more than 2.5 million acres, damaged and destroyed some 8,000 structures, and killed at least eight people.

What Causes Wildfires in the United States

Several factors contributed to the spread of wildfires in 2020. But what stood out were two events: a record-breaking heatwave and a gender reveal party. California experienced the highest temperatures it has ever seen; Los Angeles reported temperatures as high as 121 degrees Fahrenheit. Then, in that same month, a gender reveal party used a pyrotechnic device that generated smoke, sparking the fire in El Dorado.

But wildfires in the United States have always been a yearly threat, and they happen not only on the West Coast but on the East Coast as well.

Even New York State isn’t spared. According to the wildfire data that was gathered by the Forest Rangers Division from 1993 to 2017, 95 percent of wildfires in New York State started because of humans. Here’s the breakdown:

If you live near wildfire-prone areas, it’s crucial to fireproof your home and fire escape your garden. Understanding why wildfires happen and how they deal with damage can give you a better idea on how to prevent and mitigate fire damage later on.

Why these fires are so swift

Unlike other forms of fires, wildfires burn with such incredible intensity that it can easily wreak havoc to surrounding buildings and towns. They destroy properties in distinct and significant ways: radiant heat, flame impingement, and embers carried by the wind.

Strong winds can move embers up to a mile ahead of the location of the fire. These embers can start a fire in your house, especially when you live near high-risk areas. Radiant heat from the intense flames of the wildfire can also affect surfaces in your home to the point of combustion.

To keep your home safe from embers and radiant heat, you need to invest in good roofing materials and remove flammable materials from your property for at least five feet. Some fire-resistant building materials for your home include tiles, sheet iron, slate, bricks, stone, and aluminum.

Should there be wood in your home, such as wood siding and paneling, make sure to treat them with fire-retardant chemicals.

If you have already sufficiently fireproofed your home, the next step is to extend fire safety measures into your lawn and garden. According to the University of California Division of Agriculture and Natural Resource, you need to divide your home into two zones and follow these guidelines:

The Bottom Line: Prepare your yard for wildfires if you live in an at-risk region

A fire on the forest floor as high as one meter, on average, can easily reach 1,472°F. If the flames reach a height of 50 meters or more, the temperature can exceed 2,192°F. That’s how hot wildfires can burn, and when there are buildings nearby, this heat can be transferred on the surface to the point of combustion. For context, the flashpoint at which wood will burst into flames is only at 572 ° F.

Indeed, the dangers of wildfire cannot be emphasized enough. For your home to survive a wildfire, it helps to know what and where to plant. So following fire escaping and zoning guidelines as recommended by authorities. Your actions can make or break your home’s vulnerability to wildfire.