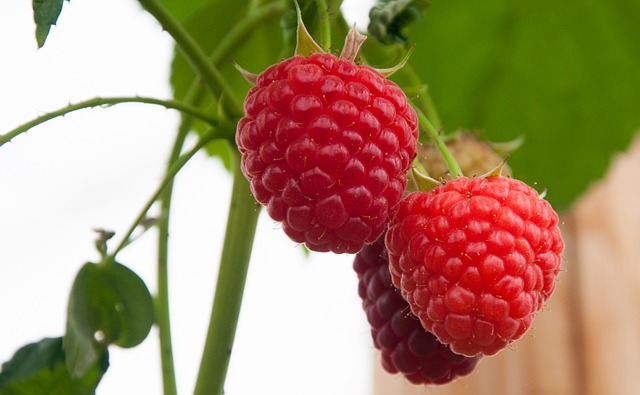 Raspberries are a real treat during the summer and autumn months. What’s great is they’re easy to grow yourself at home. And with a few well-followed guidelines. you’ll soon have a flourishing crop of exquisite berries right at your fingertips.

Here we’ll take you through everything you need to know about the best raspberry varieties to grow in your garden. We will also explain where and how to plant, and offer tips on nurturing a successful crop each year. Let’s go!

The raspberry hails from the genus Rubus which is part of the Rose family. They are perennials with woody, prickly stems throughout and are native to many temperate climates across Europe and Northern Asia.

Recommended Varieties to Grow at Home:

Today you’ll find numerous raspberry cultivars available to choose from. Generally, these fall into two categories – those that produce once during mid-summer and those that are referred to as ‘ever-bearing’, producing fruit both in summer and autumn.

Each requires a slightly different approach and many gardeners tend to have a mix of raspberry shrubs in their garden to maximize the annual harvest potential.

It’s important to be aware that many raspberry plants require a year of vegetative growth before they produce fruit and flowers in their 2nd year. Some ever-bearing varieties will though produce fruit on the first year’s growth (in the Autumn and then again the following summer). For both varieties, once the fruit has been harvested you’ll have to cut back to allow new growth and fruit to be produced.

Some of my favorite mid-summer raspberry varieties (harvesting in June and July):

Where Should I Plant Raspberries?

Raspberries love to be planted in a clear patch of soil, free from weeds and other perennials to give the root system the best chance to develop.

The most productive soil types are those that drain-well but retain moisture and have a good mix of organic compost (or manure) incorporated to maximize the nutrient base. Try to avoid any spots that are prone to water-logging or stagnant water as this is a common cause of root-rot.

Raspberries tolerate some partial shade throughout the day but truly thrive in bright sunshine so aim for the best available spot in your garden.

Some raspberry canes (referring to the branches that produce the fruit) can grow very tall (1.5m+) and strong wind can be damaging to the overall structure so look for somewhere that’s not going to face the full fury of a gale.

When Should I Plant Raspberries?

You can plant raspberries anytime during late autumn through to the start of spring. If you live somewhere particularly cold I’d recommend waiting until the soil is workable and not frozen solid.

How to Plant Raspberries

Mid-summer fruiting raspberries will certainly need some form of support as the plant grows (they typically reach up to 2m in height). A supporting frame attached to the wall, trellis or wiring (about 50cm apart) against a fence will work really well.

Ever-bearing raspberry plants tend to be a lot more robust structurally and typically won’t require the same (if any) level of support in your garden. If you’re planting both varieties I’d aim to keep them slightly separated which will help with general pruning and tending in due course.

If you’re really short of space, raspberries can also thrive in container gardens. Again, you’ll just need to ensure there’s some form of support for the mid-summer varieties.

Aim for a minimum of 50cm spacing between each raspberry plant and approximately 3 to 4 feet between rows (1 or 2 plants should produce a bountiful harvest each summer so be conscious of how many plants you’d like in the ground!).

Planting in the soil:

For each raspberry plant, dig a hole approximately 10 cm deep (or sufficient to completely cover the roots), let each one soak in water for about 10 minutes then place in the intended spot and cover with soil and a meaningful press with your hands or feet to secure in place.

Now’s a great time to give the planted raspberry canes a little trim to help encourage new growth immediately. I’d aim for around 25 to 30cm in height and then start with some loose garden wire attached to the trellis, frame or posts so the plant will immediately be trained against the support.

Caring for your Raspberry Plants

Raspberries are generally very tolerant plants once bedded in. There are a few key pointers to follow particularly during the spring and summer months:

Raspberries really enjoy consistent moisture in the ground so aim for a weekly watering cycle between early spring through summer when you’re picking the fruit.

Mulching is a great way to retain moisture and nutrients in the ground and should be spread fairly liberally (around 5 to 10 cm deep) around the base of your raspberry plants. It’s also a great insulator over the winter months to help protect the root system against super frosts and ground freeze.

Your raspberry plant shouldn’t require too much additional feeding but a good organic fertilizer specifically for fruiting plants and shrubs can be applied in early spring to give everything a kick-start.

Pruning and tending to Raspberry canes:

Keeping your raspberry plants in tip-top shape for the next season is an essential part of your annual maintenance plan. There are a few things to be aware of for both mid-summer bearing raspberries and those producing in autumn:

After the last of the fruit has been harvested for the season (usually late August into September) you’ll need to cut the respective ‘canes’ that bore fruit back to the soil level.

These are usually fairly easy to spot as they’ll have turned a brownish color). You can leave the new canes that have emerged this season alone (they’re the ones that are green – remember, it takes about 12 months for the first fruit to appear on new growth).

It’s best to leave autumn-bearing raspberry plants until late winter (typically late February or very early March) and then cut the canes right back to near soil level to let growth start afresh as soon as spring arrives. Newer growth can be left until the first harvest has been yielded in early summer.

According to the gardening experts at Petal Republic, raspberry plants are thankfully pretty hardy and you’re unlikely to have too many problems to deal with. A few common pests to be aware of:

Both particularly enjoy chewing on a plump raspberry in the summer. To fend off pesky birds you could consider some garden netting across your plant. Also, rabbits are unlikely to make it past a chicken wire fence around the base.

These creatures are particularly prevalent in the Northeastern United States and parts of Canada. There are numerous tactics that have been tried and tested. I’d recommend working through and seeing what works in your particular garden.

Powdery Mildew is fairly common in warmer, more humid climates. This disease can have an adverse effect on young plant life as it’s trying to grow. Trimming back affected areas is an easy fix as is a frequent spray with an organic fungicide which is a great preventative measure. Areas in full sunlight tend to be impacted less as well.

Wrap-Up: Grow Raspberries in Your Backyard

Raspberries are a real delight come harvest time each year. Once you get up and running you’ll find your flourishing plants can easily be propagated as well. So if you have space and the storage for an even bigger raspberry crop in subsequent years. Good luck and enjoy the fruits of your labor!

Andrew Gaumond
I’ve long been fascinated with the world of horticulture and botany. Today, I’m a lead writer for https://www.petalrepublic.com, a site dedicated to uncovering exceptional floristry and plant life around the world and showcasing the best flowers and plants for every occasion and living environment.
Latest posts by Andrew Gaumond (see all)

I’ve long been fascinated with the world of horticulture and botany. Today, I’m a lead writer for https://www.petalrepublic.com, a site dedicated to uncovering exceptional floristry and plant life around the world and showcasing the best flowers and plants for every occasion and living environment.