Home » 13 Surprisingly Easy Ways to Get Rid of Japanese Beetles 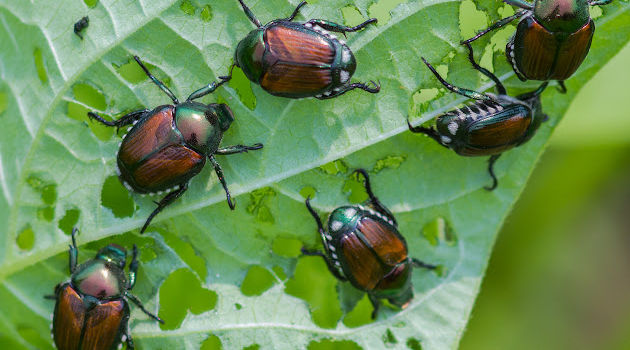 Japanese beetles are known for the destruction they cause to many plants. These small insects can cause immense damage in a short amount of time, often by stripping flowers and leaves clean.

Getting rid of Japanese beetles is not an easy task, but there are several measures you can take to protect your garden from their voracious appetites. And so, the first thing to do is to identify them.

What Are Japanese Beetles?

Japanese beetles are invasive beetle species (native to Japan, Korea, and parts of China) that damage landscapes and agricultural crops.

Adult beetles emerge from the ground in June or July, feed on leaves for about 6 weeks, reproduce, then die. Their quick life cycle (about 30 days) allows them to lay up to 60 eggs each time they breed.

The new generation of beetles is called ‘grubs’ and they will stay in the ground for almost two years before they turn into adult beetles.

Adult Japanese beetles are about half an inch long with a metallic green head, tan wing covers, white tufts along their sides, and copper-colored undersides. They have six hairy legs that allow them to fly swiftly.

Japanese beetle infestations are highly localized. Small, heavily infested areas surrounded by untreated vegetation allow the beetles to travel easily from untreated to treated areas. So even if you have little beetles in your yard, it’s likely that they will spread into surrounding properties unless precautions are taken, so it’s important to let your neighbors know about the beetle problem.

How Much Damage Do Japanese Beetles Cause?

Japanese beetles don’t bite or sting and rarely come into contact with humans, but they can devastate a garden if not taken care of.

They eat leaves, flowers, and fruit on more than 300 types of plants such as roses, maples, grapevines, and birch trees.

This leads to weakened plants that are less attractive and produce fewer fruits or seeds, which reduces habitat for birds and other wildlife.

The larvae will also feed on grassroots making it difficult for your lawn to grow back.

Try these hints to free your yard of these damaging insects.

1 – Use Natural Repellents to Get Rid of Japanese Beetles

One of the best ways to get rid of Japanese beetles is to use repellents that thwart them as they try to feed.

You can do this by planting roses, raspberries, and catnip, all of which Japanese beetles dislike.

While it’s best to plant these attractants near the parts of your garden you most want to protect (for instance, your prized rose bush), planting them in several locations to confuse the beetles can help prevent them from finding their favorite food sources.

Japanese beetles spend their larval stage underground and emerge as adults during hot summer months to wreak havoc on your garden.

Since you can’t see the grubs when they’re in the soil, the best way to deal with them is to attack before they become a problem.

If you have an infestation every summer, applying beneficial nematodes in early spring—before Japanese beetles take flight—can reduce your grub population by 90 percent or more.

You can also try applying beneficial nematodes later in the summer after Japanese beetles have emerged.

Remember that they only work on grubs, so you may need to use another strategy to deal with adult beetles directly.

3 – Employ Insecticidal Soap to Get Rid of Japanese Beetles

Insecticidal soap is one of the safest natural remedies for getting rid of Japanese beetles, working by dehydrating the beetles’ exoskeletons.

But most importantly, it’s effective at killing them on contact, so you can eradicate a local infestation simply by spraying affected plants and nearby vegetation. Select a product made from potassium salts of fatty acids for best results, since these formulations are less likely to harm your plants than those made from sodium salts.

Oil sprays work by coating and smothering insects and can be an effective treatment for Japanese beetles.

These products can be refined petroleum-based or organic. Some can cause damage to plants when temperatures soar above 90 degrees Fahrenheit. Learn about the product before you decide.

Diatomaceous earth, which consists of ground-up fossils called diatoms, is another safe product you can use to deal with Japanese beetles. It dehydrates the bugs by removing the waxy coating on their exoskeletons, causing them to die of dehydration.

Unlike insecticidal soap and horticultural oil, however, you’ll need to reapply it after a rainstorm or following a watering session in your garden.

While not exactly a product for the squeamish, this nontoxic deterrent works by disrupting the beetles’ feeding habits, making it an effective way to get rid of them.

Simply combine a cup each of chopped garlic and hot chile peppers with two gallons of water in a bucket, then let the mixture steep overnight. Once it’s ready, strain out the solids and pour the tea into a spray bottle to use on Japanese beetle-infested plants.

7 – Use a Trap for Japanese Beetles

Japanese beetle traps typically consist of a large box that lures the beetles in with a pheromone and then traps them inside, preventing them from wreaking havoc on your garden. Pheromones are powerful chemicals insects use to communicate, so using one as bait can be an effective way to lure Japanese beetles away from your prized shrubs and vegetables.

Wrap burlap around the trunks of trees where beetles are known to hide during the day. Secure it tightly with twine or string, then poke small holes in the burlap that will allow adult beetles to enter but not escape. The burlap also protects bark from damage caused by beetles which may chew the trunk while foraging for food or laying eggs.

Remove the burlap at night when beetles are most active, then roll up the material and dispose of it in sealed bags. The next day, reset the traps by hanging them back on the trunks of trees.

9 – Use a Vacuum Attachment

Use a small hand-held vacuum attachment to suck up adult Japanese beetles from plants. Be sure to wear protective glasses and work in an open space away from people or pets.

10 – Water Plants Early in the Morning

Japanese beetles are most active during the afternoon, which means that if you water your plants in the morning, they’ll avoid them. Besides that, watering early will help to keep Japanese beetle damage at bay all season long!

Japanese beetles are not only attracted to the smell of aphids but also love to eat their favorite food: milkweed.

And so, to keep the beetles away from your garden, plant some milkweed. When you see the insects attached to the plant, fill a bucket with warm water, dish soap, and a tablespoon of vegetable oil, and knock them into the bucket by hand.

This may seem counterintuitive, but actually is an effective way to prevent more beetles from moving into your garden.

If you prune off any flowers that are already infested, the beetles will avoid them until they’re gone. To fully rid yourself of Japanese beetles, cut or burn all die-offs (unless they have matured into a tiny white bug, in which case you should place them in soapy water or a sealed plastic bag).

If you have only a few Japanese beetle grubs or adults, you might not need to take any protection measures at all to save your garden this year.

To get rid of these bugs by hand, simply pick them up along with the leaves where you see them crawling. Drop them in a bucket of soapy water and a few drops of vegetable oil to kill them or into a bowl of rubbing alcohol, which poisons the bugs.

The Takeaway on Coping With Japanese Beetles

The Japanese beetles are a type of pest that can wreak havoc on your lawn and garden, but you don’t have to let them win. Simply follow the above methods and rid these annoying insects of your garden. Do you know of any other ways to get rid of Japanese Beetles? Share your hints on the DIY Home & Garden Facebook page!